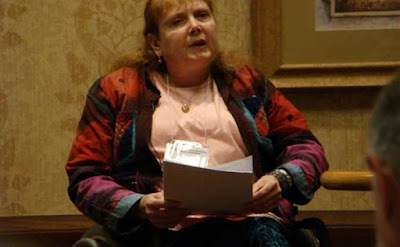 Drawing attention to Ali on the third anniversary of her death,  the leading pro-life media site LifeSiteNews says that Ali's message "continues to resonate after her suffering and death."

Disability, pro-life advocate's message continues to resonate after her suffering and death

December 2, 2016 (LifeSiteNews) – Suffering has value, meaning and a purpose, and despite the world’s attitude that it should be avoided and eliminated, suffering is actually good news for Christians.

This is the message that pro-life and disability advocate Colin Harte shared on the third anniversary of the death of a beloved disability rights and pro-life advocate, who herself suffered greatly throughout her life.
Alison Davis was a UK woman born with spina bifida who later developed other conditions such as osteoporosis, arthritis, and chronic obstructive pulmonary disease. She lived daily with extreme pain, and for many years she wanted to "end it all."
But instead she turned from being pro-abortion to pro-life. And she was someone who had tried to end her own life at one point but would go on to become a most powerful advocate against assisted suicide and euthanasia, for 30 years representing the Society for the Protection of Unborn Children’s (SPUC) disability rights group “No Less Human” in the UK.
Davis advocated that individuals with disabilities “deserve the same kind of help routinely given to those who do not have a physical condition but who feel suicidal.”
“She turned from being an atheist to being a Catholic,” Harte said, “and the most extraordinary Catholic at that. One who loved God and human beings intensely.”
Harte was Davis’ caregiver and constant companion from 1987 until her death. The two established a charity for children with disabilities in need of care and support in South India in 1995. He believes Davis will be recognized by the Church one day for her holiness and sanctity. 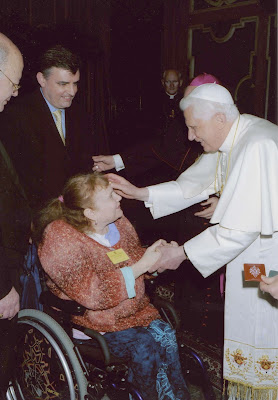 On the third anniversary.....

I'm not sure if this photo needs an explanation.  For many of Ali's friends it won't be a surprise to see her surrounded by soft toys, especially bears.  Others may regard it as a strange choice of picture to display on the third anniversary of the death of someone who may in due course be regarded (as I believe she will be) as one of the great saints in the Catholic Church.

Yes, I could have shown a more 'sober' photo of Ali;  one which might seem more fitting for someone who in due course should be considered (in the view of many people including myself) for canonisation.  However, even though there is so much to be said about Ali that is sober and serious and solemn,  we can only understand her if we realise that she was not at all stuffy or 'grown up.'  In fact, she was extraordinarily child-like, and her child-likeness co-existed with the various serious things she thought and said and did.

Of course, Jesus Christ Himself said that we shall not enter the kingdom of heaven unless we become like little children (Matt 18:3).  So today it seems fitting, on the anniversary of the day on which she entered into eternal life, to remember Ali's simplicity and child-likeness and the joy she radiated by just being Ali.

The Purpose of this Blog

This blog was originally set up to give information about the funeral arrangements following Alison's death on 3 December 2013, and to provide a means of preserving some of the many tributes expressed after her death. Its ongoing purpose will be to provide further information about the extraordinary woman that Alison was.
For those who knew her, Alison - or Ali as she was known to some - was an exceptional woman who attracted people to her because of her honesty, sympathy, generosity, kindness, wit, joyful good humour, intelligence, integrity and compassion.
The author of this blog, who shared her life for more than 24 years, can attest better than anybody to the genuineness of her character. She had a genuine and intense love for people which flowed from an intense love of God.
For decades Ali experienced suffering that was physical, emotional, social, mental and spiritual. It was an extreme suffering, which she regarded not only as a "privilege" but as "the greatest privilege possible in the world," because she knew that in her sufferings she could unite herself with and participate in the sufferings of Christ.
Ali had been pro-abortion and an atheist. She became pro-life while remaining an atheist for several years. Then in 1991 she was received into the Catholic Church.
The Catholic Church wisely does not normally introduce causes for canonisation until at least five years after somebody has died. The author of this blog will be writing an account of the exceptional holiness of Ali's life and death, and will be petitioning the Church authorities to open her cause at an appropriate time.
It is the conviction of the author of this blog that Ali is not only a saint but that she will be recognised in due course as one of the great saints. However, he respects fully any judgment that the Church may one day deliver on this.