Baby Ali - giving thanks for her birth

Just to be born nowadays is an achievement, with one in five babies not being allowed to see the light of day because "choice" is rated higher than human life itself.  For babies born with spina bifida the prejudice is so great that 90% are aborted.  After Ali became aware, in the early 1980s, of the great injustice towards unborn children, she spent the rest of her life defending their right to life.

After Ali's death I came across a short video on YouTube, taken from a TV programme in the Republic of Ireland, broadcast on 25 August 1983, shortly before the September 1983 referendum that brought constitutional protection to unborn children.  Ali does not speak in the YouTube excerpt and I do not know if she spoke in the programme itself. It would have been one of Ali's first appearances on television, if not her first.  She makes a couple of brief appearances in the audience after 1 minute 40 seconds. 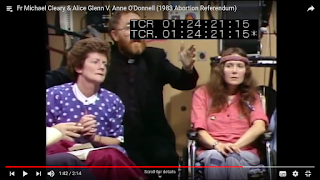 Ali would have been dismayed by the Irish referendum result last year that removed constitutional protection for unborn children, and by the law subsequently passed that came into effect just one week ago on 1st January 2019.  The new law allows abortion on demand in the first 12 weeks of pregnancy, and indicates a range of grounds for abortion at any time during pregnancy (as does the UK law).

While the new law specifically allows abortion at any time of gestation - i.e., right up until birth - for those babies who are expected (maybe rightly; maybe wrongly) to have a very short life after birth,  abortion campaigners claimed they were not promoting abortion more generally on grounds of disability.  It is, however, impossible to maintain that the right to life of disabled babies, as well as other babies,  has not been greatly undermined by the change in the law.

Ali was born 12 years before the UK's Abortion Act was enacted.  In today's world, we have to be so very thankful that she had the opportunity even to be born.
Posted by Colin Harte at 15:00 No comments:

The Purpose of this Blog

This blog was originally set up to give information about the funeral arrangements following Alison's death on 3 December 2013, and to provide a means of preserving some of the many tributes expressed after her death. Its ongoing purpose will be to provide further information about the extraordinary woman that Alison was.
For those who knew her, Alison - or Ali as she was known to some - was an exceptional woman who attracted people to her because of her honesty, sympathy, generosity, kindness, wit, joyful good humour, intelligence, integrity and compassion.
The author of this blog, who shared her life for more than 24 years, can attest better than anybody to the genuineness of her character. She had a genuine and intense love for people which flowed from an intense love of God.
For decades Ali experienced suffering that was physical, emotional, social, mental and spiritual. It was an extreme suffering, which she regarded not only as a "privilege" but as "the greatest privilege possible in the world," because she knew that in her sufferings she could unite herself with and participate in the sufferings of Christ.
Ali had been pro-abortion and an atheist. She became pro-life while remaining an atheist for several years. Then in 1991 she was received into the Catholic Church.
The Catholic Church wisely does not normally introduce causes for canonisation until at least five years after somebody has died. The author of this blog will be writing an account of the exceptional holiness of Ali's life and death, and will be petitioning the Church authorities to open her cause at an appropriate time.
It is the conviction of the author of this blog that Ali is not only a saint but that she will be recognised in due course as one of the great saints. However, he respects fully any judgment that the Church may one day deliver on this.